Going to the theater 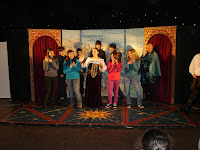 It was a very funny play because the actors which performed the theatre were able to introduce in it, a variety of jokes and these, made the play, a comedy. The interaction with the public created a true and unique experience.

Hermia and her lover, Lysander decided to run into the forest. Hermia told Helena about her plan, but Helena informed Demetrius to conquer his love. Demetrius and Helena followed the young couple through the woods.

Oberon and Titania argued about an orphan child because Oberon wants him to be his servant and Titania refused. Oberon told Puck to go get a flower, which when squeezed, poured a magical juice into people’s eyes and made them fall in love with the first person they saw. Puck squeezed the flower into Titania’s eyes while she was asleep. Oberon sent Puck to pour some juice into Demetrius eyes, due to his evil acts in the forest, but, Puck poured the juice into the wrong person – Lysander. When he got back to Oberon, he told him about his mistake and, Puck got back into the forest. Puck squeezed the flower into Demetrius eyes and, when both woke up, they saw Helena and, fell in love. Since both of them loved Helena, they got into an argument over her. Oberon sent Puck to remove the spell from Lysander’s eyes so he fell in love with Hermia again. 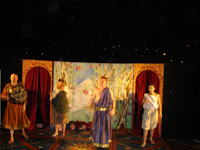 At the end, the four lovers were all in love with the right person: Hermia with Lysander, Helena with Demetrius. For them, it was only a dream and at night the fairies entered their houses and blessed them.

Just like last year, the actors have done magic again . . .